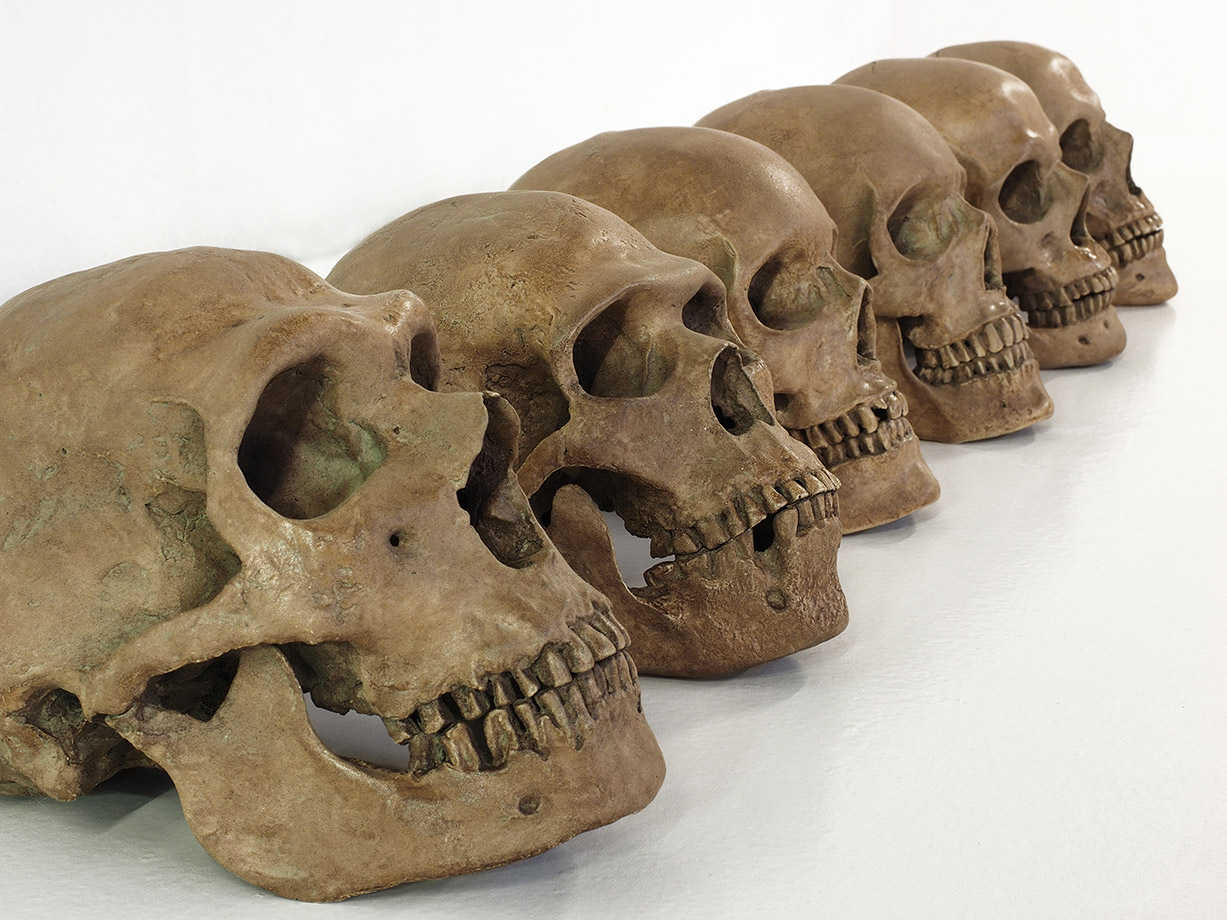 By ten thousand years ago Homo sapiens had reached a physical form similar to that of contemporary humans. They had come to dominate their physical environment, out competing all other life forms. Their ability to imagine would shape their ability to change, and the narratives developed would shape those changes. They had become master story tellers, weaving myths that would suit their ambitions. They had created pantheons of religious belief, gods in their own image and an afterlife to deal with the problem of death.

The drive for power, security and comfort would shape the human world as the products of that world took on ever more elaborate form. (1) Human beings would separate themselves from the other animals, classify species, races and creeds with distinct cultural, economic and ideological constructs. Technology would shape intelligence, interlinking creativity and identity. Diet, landscapes and even the measurement of time would be shaped by a view of a universe at which men were firmly at the centre.

By the end of the 20th century unparalleled technological and agricultural advances had taken place, along with self inflicted environmental disasters and genocide on an unprecedented scale. Movement from feudal clans to interconnected global species had redesigned much of the inhabited planet, offering systems that would create freedom from illness and hunger. As medical innovation increased, interventions with the body and the environment would shape the next generation of change in human evolution, changes that would fundamentally alter the perception of the natural by human intervention.

Somewhere between 1.9 and 1.6 million years ago changes in the hominid brain began to accelerate, with dramatic increases in size and neuroplasticity. (2) As a greater range of connections between the hominid brain and hand took place, the use of and design of tools instigated a critical evolutionary leap.

About 1 million years later Homo sapiens and their close Neanderthal (3) relatives began diverging from a common ancestor, with the two groups thought to separate permanently around 300,000 years later. (4) By 40,000 years ago what would come to be known as Europe and the Near East were thought to be colonised, firstly by Neanderthals and then by Homo sapiens. Language had developed amongst the hominids that shared in a range of early cultural activities, including the development of decorative artefacts, body adornment and early forms of organised religion.

Neanderthals (5) were thought to differ from other hominids in a number of ways. They would be taller and stronger than Homo Erectus, larger boned and more heavily muscled than most modern humans, and they would have brains that were considerably larger than the average human brain found in the 21st century. (6) They were advanced in fire-making and hunting, establishing temporary camps when needed, cooking their food and living in small communities. They were thought to be the first hominids to engage in ritualistic rites of passage, leaving evidence of sophisticated body painting and careful preparation of the dead.

The brain of a modern human would use about 20 Watts of energy, approximately 400 calories per day, accounting for about 20% of the total energy consumption used by the human body. (7) Hunting for larger animals in greater numbers, using new tools and techniques, meant that early humans would gain increasing amounts of energy, allowing the development and sustenance of larger and more complex brains. The gradual mastery of environment would create more time and energy to develop specialised and more efficient tools, along with a wider variety of problem solving systems.

Increasing social activities, greater diet and greater lifespan would all play their part in the developing complexity and connectivity of the brain. With radical shifts in behaviour and technology humans were moving beyond the limits of finding food and avoiding predators. Considering more abstract problems they were developing skills to pre empt the future, through planning and imagining what could lie ahead. With increasing self awareness the individual and the group were forced to acknowledge life’s most difficult problem, and new rationales were developed to circumnavigate the omnipresence of mortality. Religious structures and mystical realms would offer solutions to the vast array of problems that hominids were now facing, as societies grew more complex and greater in size. Worship and prayer would be organised and ritualised, with new means of communication designed to give structure to increasingly organised labour and social hierarchies. (8)

Between 60 to 10,000 years ago complex paintings began to appear deep within caves, adorning the rock walls. The interconnected schema would create pictorial and theatrical spaces, with hundreds of drawings and paintings being added to complex collections of diagrams that would cover the caves being used. Some of the paintings were executed on a large scale, high above the floor, pointing to the utilisation of lighting, scaffolding and a degree of planning and collaboration. The caves themselves would seem to suggest areas for reflection, contemplation or theatrical spectacle, evoking philosophical thought and religious ceremony.

Cave painting and other creative activities would illustrate a critical shift in the behaviour, thinking and developmental capabilities of the human brain. Creative thinking, problem solving, intentional adaptation and the ability to cooperate would all play crucial roles in increasing the ability to survive and interpret existence. Increases in creativity would not only allow people to think differently, to imagine new ways of living and problem solving, they would have a direct impact on quality of life, giving meaning and accomplishment beyond the base survival instincts of killing, eating and breading.

In 2013 a group of scientists were working in the Bruniquel caves (9) in southwest France, analysing extraordinary forms hidden for eons deep within the cave systems. Structures had been built with nearly 400 stalagmites, (10) roughly cut to similar lengths. Some of the stalagmites would form a large circular shape measuring nearly 22 feet (6.7 meters) across, with a second group aligned in a smaller semicircle. (11) Created around 176,000 years old, these structures predated what had been thought to be the Homo sapien arrival in Europe by more than 100,000 years. Their discovery would instigate new research offering evidence that would contradict a fundamental concept in human history; that art was the invention of a species called Homo sapiens.

As the human brain developed greater integration, so too would the ability to control and expand mental processes and to think in abstract terms. The capacity to remember the past at will, to consider and imagine the future, to consider oneself as different from other animals, to wonder about events that had not yet happened, or events that had not been directly experienced, were being shaped over the course of history. With the evolution of memory and internal language came awareness of mortality and loss, bringing with it the development of ideas of mystical realms.

With the population explosion of the 20th century, large social groups would create ever greater competition and social hierarchies of increasing complexity. The capacity of the human brain would increase exponentially. (12) (13) In the 21st century the kinds of intelligence that will dominate are yet to be seen, as is the role that technology will play in shaping ideas of what we can be, and what we should become.

2. In the early twentieth century evidence has shown that the brain’s abilities and structure are malleable. In the principle of neuroplasticity, the brain is constantly changing in response to experiences, input and environment. Behaviour, learning, environmental change and physical injury may all stimulate the brain to reorganise existing neural pathways or to create new ones, fundamentally altering the processing of information. The understanding of neuroplasticity challenged traditional views that cognitive abilities became immutable once a person had reached adulthood.

3. While Neanderthals have commonly been classified as a subspecies of Homo sapien, DNA mapping has illustrated that the Neanderthal was not a separate species.

4. Based on the estimated divergence date of 4-5 million years ago for humans and chimpanzees, estimates state the human and Neanderthal divergence at 550,000-690,000 years ago. The age of the common human ancestor, using the same procedure, is about 120,000-150,000 years ago.

5. Neanderthals were thought to live between 300,000 – 28,000 years BCE. During these times the Neanderthals developed ceremonial burials of the dead, indicating greater concern for and awareness of mortality, as well as the possibility of early formed religious beliefs.

6. Skulls classified as Neanderthal were far larger than that of a modern human, with a cavity carrying a significantly larger brain. 37 The average modern adult human brain weighs around 1.5 kg, or 3.3 lbs. Brain sizes can vary substantially from 974.9 to 1398.1 cm3 in women and 1052.9 to 1498.5 cm3 in men. Hominid brain size has changed dramatically over time, with early examples of Homo Habilis (living approximately 2.8 to 1.4 million years ago) being around 600 cm3, and Homo neandertalensis (living approximately (400,000 to 40,000 years ago years ago) being around 1600 cm3, the largest brain in the hominid line. While 6 Brain weight in relation to body weight is relatively large in modern humans, but brain size is not the only deciding factor when it comes to language development or flexible thought, with diet, culture, environmental pressures and usage all affecting the brain’s neuroplasticity.

The human brain uses roughly 20 watts of energy, about 20% of the body’s total energy budget. It evolved to be fueled by the body, enhancing its survival. To some extent the brain has evolved to avoid making changes or initiating actions that consume mental or physical energy out with immediate survival needs.

9. The Bruniquel Cave is located in southwest France, in a region that has many decorated caves and significant Paleolithic sites.

11. The site included stacks of other stalagmites, lain out in order, as if waiting to be used.

12. Jeremy Genovese, Snakes and Ladders: A Reappraisal of the Triune Brain Hypothesis. p.6